paulthetall
View other Ports from this member

Please Post a reply if you take this game. I put a lot of efffort and time in making this possible. Thanks.

Pinball Fantasies:
After the success of Pinball Dreams on several systems, a sequel featuring four new tables was created. The gameplay is much the same as the first game, with realistic physics, multi-player options and a high score table to aim for. The tables are Partyland, Speed Devils, Billion Dollar Gameshow and Stones 'n' Bones, taking in a funfair, racing cars, a tacky game-show, and a graveyard. Each one has a range of ramps, combos, light sequences and targets to shoot, as well as general themes which are less influenced by real tables than those in Pinball Dreams.

Controls:
F1-F5 game options, Left and right ctrl key for the flippers, The down cursor key for getting ball in game.
Press page down and page up, for more Pinball machines (4 in total)

Notes:
This game includes Amiga500 kickrom. Be legal and buy the amiga forever pack so cloanto will get there part for there work/licenses.

Windows Keyboard or apple keyboard with numlock required for "page up and Down" option!

One of the best Pinball ive played together with Pinball Dreams. Fun from the upper shelf with the greatest Sound/music.
THIS IS DISK VERSION, MUCH BETTER then CD32!! 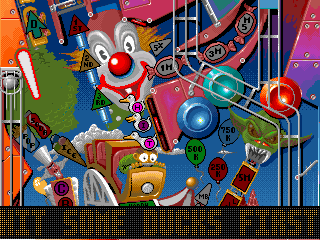 paulthetall
May 24 2010 02:24 PM
If anyone notices a lag in the flippers, then press F12 Go to floppy Drive --> set floppyspeed to 800% then save hardware --> save configuration and the restart/reset the game.

Grejam53
Oct 18 2014 04:48 PM
Finally got it download but I get an error message when trying to run stating:  "ERROR! Cannot run! Engine not installed! Engine requirement listed: CXZ Black Diamond"