Download this Classic Star Trek The Next Generation - A Final Unity

Game Description:
Star Trek: The Next Generation - A Final Unity is a computer game by Spectrum HoloByte, based on the Star Trek universe.

The cast of Star Trek: The Next Generation reprise their roles, providing the voices of their respective characters.

This game is very well done - Spectrum spent a ton of money getting all the cast together to voice this game.

The game opens in the exact fashion a Star Trek TNG episode would open.

Personal Notes:
This in my opinion is the best Star Trek Game ever made.  Well worth my purchase money all those years ago.

Plot:
While on routine patrol near the Romulan neutral zone, the Enterprise intercepts a distress signal from the crew of a Garidian scout ship, seeking asylum in Federation space. After a brief confrontation with the commander of a Garidian Warbird the crew of the scout ship is beamed aboard the Enterprise. One of the refugees mentions to Captain Picard that they are in search of the Lawgiver's legendary Fifth Scroll, which could aid in preventing war on Garid. Picard agrees to assist them, and the crew of the Enterprise sets out in search of clues to the location of the scroll.

After searching various star systems and completing several away missions, the crew of the Enterprise realizes that the scroll points to the existence of an enormous and powerful ancient structure, known as the Unity Device, that was created by the Chodak, an unknown alien race, during the peak of their civilization.

The storyline takes place around Stardate 47111.1, according to the opening sequence of the game. This places the events between the first two episodes of the seventh season of the series, Descent and Liaisons.  [/b]

Port Info:
I used thedoctor45's dosbox wrapper here. There are manuals, etc included - along with the cut-scenes in mpg format in the game directory look for them there.

Known Issues:
Colours of the opening videos are off - they use the wrong colours - none of the tweaks I did to the dosbox.conf file seemed to work - so it is a work in progress with that....anyone have a good idea for a fix for that let me know

Installation:
Drag the game to your app folder or wherever click and play 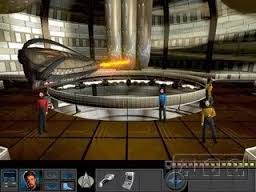 The problem is that in high-color and true-color mode the color channels get mixed up and produce strange artifacts.

midnightbrewer
Jul 23 2013 01:24 PM
Regarding the color problem: what about setting the color output to use OpenGL instead of Glide? There seems to be some documentation regarding this on the DOSBox Wiki. http://www.dosbox.co...ing_in_Mac_OS_X