Game Description:
Albion is a single player computer role-playing game developed and published by Blue Byte Software for MS-DOS in 1995 and in North America in 1996. It was originally released in German, then translated to English for international release. The game features a science fiction setting that incorporates traditional fantasy elements, such as magic.

Personal Notes:
Nothing really other than it is the CD version.

Plot:
In the year 2230, the gigantic, interstellar space ship Toronto emerges from hyperspace at the edge of a distant planetary system. The ship's owners, the multinational DDT corporation, believe that there are rich deposits of raw materials on one of the planets in the system, and the Toronto is to mine the whole planet's resources at once. The player is cast in the role of Tom Driscoll, the pilot of the reconnaissance shuttle sent to verify the status of the planet. When his shuttle malfunctions, forcing him to make a crash landing, Tom discovers that the data that described the planet as a desert world was false. Albion is a world teeming with life, secrets, surprises, and magic. It is up to him to alert the crew of the Toronto to the true situation in order to save Albion and its inhabitants.

Known Issues:
Not yet tested on Macs with GMA 950 Chipsets though it should work.

Safari will not work to download from the Mega site. You need to use Firefox / Chrome or Jdownloader - http://portingteam.c...s-the-easy-way/ 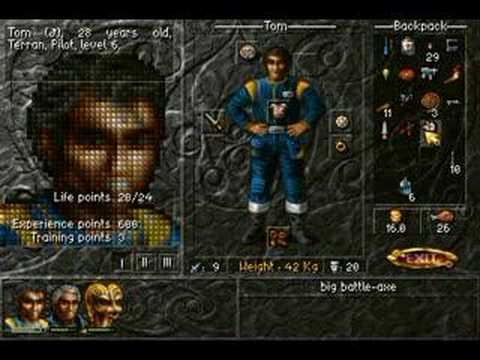 MindBrain
Mar 06 2011 04:17 AM
I have a problem I've noticed with this and other dosbox games. The first time the program loaded and started fine, but when I open the app a second time it only takes me to the dos prompt, anyone know what I'm doing wrong?

Edit: Oh I moved the app to "DOS Games" folder and now it works, not sure why it doesn't work when in "applications" folder

Shmeese
Jun 05 2012 10:28 AM
Hey, thank you for the game. I had tried to get this running before but I ran into the problem that many others were having with the game freezing after the intro. How did you manage to fix it, or did it even occur for you?

ireefman
Jul 05 2013 05:36 AM
Instead of downloading something when I click on the "Download this classic" button, I get taken to the MEGA file sharing website, with no links to any downloadable stuff. Am I missing something? I can't download this port...

Safari will not work to download from the Mega site. You need to use Firefox / Chrome or Jdownloader - http://portingteam.c...s-the-easy-way/

I assume you are using Safari, Which will not work?

I just tried Firefox, it works with no issues.

Open the dosbox.conf file with textedit (or whatever)

Run the app as normal - will work without issue.

Also for anyone else if it crashes on 10.8 the fix is:
Fix for 10.8 =
Alt+Enter to switch from Windowed Mode / Full screen mode and vice-versa.
It has stopped crashing after this, but runs only in window. If I go alt+enter it crashes without a sound. Any fix?