Unlike Winter Assault, Dark Crusade is a standalone expansion that does not require prior installation of Dawn of War or Winter Assault to play, allowing the user to play as all seven factions in both single player Skirmish and Campaign modes.

Personal Notes:
This was my very first port from the days of cider 1310. (and its taken me this long to properly post it, slack I know.)
Multiplayer works, you can play with all races in multiplayer too (as long as you leave the "games" folder alone). I have not tested it online. Mods work, even excessive ones like mine.

Installation:
Install the game into windows (or crossover) then copy the "Dawn of War - Dark Crusade" folder into contents/Resources/transgaming/c_drive/Program Files/THQ/ replacing my one. There is an alis (shortcut) to the c drive but it might not work. You don't need to install the first few games. It thinks they are allready there.

LillyOmegaWolf
Jun 21 2011 01:00 AM
Thats odd. My mods appear in my dow and they run rock solid (only way I play it...) Are you using 1.2 version of dow? Also, (stupid question here, but) have you made sure that the mod you want to load and its .module file is in the dawn of war dark crusade folder?

LillyOmegaWolf
Jul 06 2011 06:03 AM
Yes I have ported Soulstorm too, yes it would be easy to post it online. Ill post it up as soon as I have time.

chrissomerry
Aug 07 2011 04:13 AM
EDIT: Campaign works great for me, but I've got a minor problem: the textures of plants, foliage, trees etc seem to make certain texture effects "invisible" behind the parts of the plant textures that should be transparent. It makes it seem like there's an invisible square around trees that makes unit occlusion, water, shadows, lights and other effects disappear.

Any plants in fog of war also have this "invisible" box around them appear semi-transparent black.

LillyOmegaWolf
Aug 16 2011 09:56 PM
Have you tried fiddiling around with the graphics settings?

Have you tried fiddiling around with the graphics settings?
Yep, I've put them all on various notches (I thought fog of war might have some sort of relevance but apparently not), tried different resolutions and the problem persists.

This actually is fixed if I use the Soulstorm port and just change the target exe, although then I can't do the campaign... Might just have to get Soulstorm if there's no solution and use that port so I can do campaign.

I've also patched the game to see if that works (up to 1.2) but nothing changes.

I'll take some screenshots of the Panrea lowlands map if that helps?

Otherwise what's your game's config that it runs well on? Perhaps there's a combination I'm missing...

LillyOmegaWolf
Sep 01 2011 08:58 PM
I find just turning off the setting that makes units appear from behind terain, unit occulation, I think it is (making them appear in diffrent colours) and the game run fine. All other setting I stick on max.
And if you are on a mac with a resolution more than 1280x800 then I recomend trying 1280x800 in Dark crusade. DOW seems to like it better than any other resolution in OS X for some reason.

The game has been well tested on several macs with the nvidia 9400m with no glitches.  (and you list your card as a 9400, so I assmue they are the same card) So im not sure why your mac would be having issues. Have you updated to a newer version of Snow Leopard (or lion) yet? (again, your listing is 10.6.6)

Screene would be good. Does the same graphics glitch happen in both campain as well as other game modes (like multiplayer)? From the sound of things it reminds me of a graphics glitch one of my friends pc's had for a while with this game.


and is it my wrapper for Soulstorm that works for you?

I tried turning unit occlusion (dissapear-behind-buildings thingy) on and off, no difference (both from the main menu, or from the in-game menu).

And I haven't upgraded yet, but that's more because the combo update is ~1GB and being Australian my internet is capped (I might have a chance later in the month though). So yep, still at 10.6.6. Has anyone else had a similar problem though at this level?

And it occurs in both Campaign and Skirmish too.

As for the Soulstorm wrapper, the graphics are perfect in that when trying to run Dark Crusade, but the campaign doesn't work (I'd assume Soulstorm's would work fine, but I haven't got it to test and my mate doesn't wanna lend me it ;)). 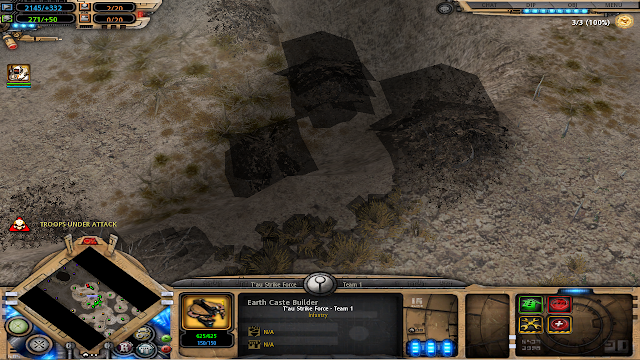 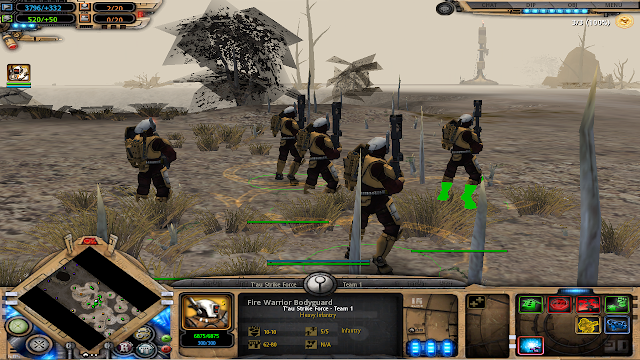 (Unit occlusion is on here, but it doesn't matter since the glitch remains anyway with it off)

Phew, I think my mind's pooped from learning how to use Picasa again :)


what mac do you have?

I might actually ask, did you have to do any tweaks to the wrapper to get the campaign working (e.g. how the campaign routinely crashes on wine)? Maybe I could try updating the wrapper and see if it's just a compatibility problem with my setup (I can't seem to get volumetric shadows either, but it might just not like the graphics card).

The only other problem might be that to get this working first off in the Dark Crusade Wrapper, I have to run the graphics config in any form of wine, and then drag the folder back into the wrapper. Maybe the game's config it gets from running under wine isn't correct for cider/cedega...

LillyOmegaWolf
Sep 06 2011 08:24 PM
I ported this years ago... from what I remember, I don't think I had to do anything extra to get campain going. Since this wrapper is an old cider one I could try updating it to ciderX. Might make it run without glitches on your machine.

To set up graphics I have always started up DOW then changed its deafault values to suit the mac it is running on. You should not need to run the graphics config from another wrapper (I have found no diffrence to running or not running the graphics set up utillity).

chrissomerry
Sep 07 2011 03:10 PM
I might try then seeing if I can pretend to know what I'm doing and try "making meself some fermented apple juice" to see if I can get it working ;)

That's funny though, I can't get the graphics config running through the wrapper itself. The game simply doesn't start up for me if I try running it in the wrapper without having configured it in a wine wrapper. Cider might just hate my computer though.

chrissomerry
Sep 07 2011 04:17 PM
OK I'm going with this likely being my computer (unless I've done something wrong with graphics config tool), since I tried a later Cider wrapper (6635 from Lego Universe) and the bug's still there.

So now I'm curious as to why I can't get the graphics config to work from the cider wrapper, in case the wine wrapper gives it a setting that doesn't work for the cider one...

Speaking of which, should my graphics config be saying I have a Nvidia 9400 GT in an old 2009 Mac mini? That seems a bit strange when other games say I have an Nvidia 9400 M...