Game Description:
X-COM: Apocalypse is the third game in the X-COM series of computer games. It was developed by Mythos Games (the creators of the original X-COM game), and published by MicroProse in 1997 for DOS and Microsoft Windows (32-bit family).

Plot:
Half a century after the end of the second X-COM campaign, the last battle of T'leth has severely damaged Earth's biosphere. As a result, several self-contained Megalopolis-type cities were proposed to provide habitation for humanity. The game follows Mega-Primus, the first of these cities, built over the ruins of Toronto, Canada. Meanwhile the off-world colony of Mars is exploited by the Elerium mining corporation, Solmine, and oppressed by MarSec (MARs SECurity).

The alien threat in the game is presented by a new race of organic, extradimensional aliens that initially seem to have no relation to the aliens of the previous two games, though later missions set in the aliens' home dimension reveal they have enslaved Sectoid survivors. These new aliens attack the city through tetrahedron-shaped teleport gates. The player must find out how to send their own aircraft, along with X-COM agents, through these gates without being destroyed and take the war to the aliens. Apocalypse has fourteen fictional races of alien beings. Each race has various strengths and weaknesses, and some races are dependent on other races. The "alien life cycle" plays a crucial role in the game.

Known Issues:
Not yet tested on Macs with GMA 950 Chipsets though it should work. Intro video has been disabled.

Installation:
(No longer need to do so) - Mount the .DMG Drag the X-COM.app to your App Folder (or wherever) - click and play.

How Do I combine parts?  Check out @ http://portingteam.c...-combine-files/ 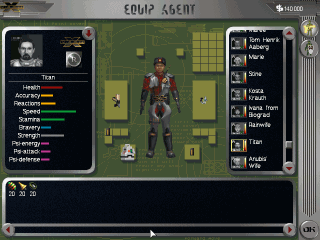 When the crash happens repeating sound and the screen does not respond.
_____
MacBookPro
GeForce 8600M GT
Mac OS X 10.6

cybd
Aug 29 2013 05:25 PM
Thanx for release. Game started successfuly, but when I started to add scientists for investigation -- it hangs. See screenshot below.

SueDeNimes
Sep 25 2013 05:33 PM
Tried downloading with JDownloader and it says there is nothing at the link to download.

tomfolly
Aug 07 2014 07:08 PM
i get a message that the .dmg is broken,, i have tried downloading it again and saving it on different locations.
I really liked this game back in the days, and looked forward to trying it again, am i doing something wrong in trying to get it?