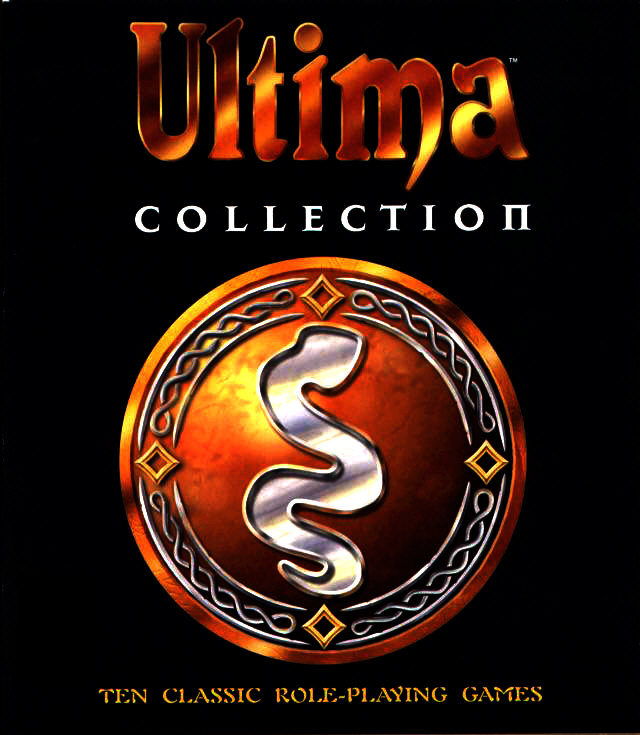 Game Description:
Ultima is a series of fantasy role-playing video games from Origin Systems, Inc. Ultima was created by Richard Garriott, a.k.a. Lord British. Several games of the series are considered seminal games of their genre. Today, Electronic Arts holds the brand.

Personal Notes:
One of the best Role Playing Series of all time.

In Ultima I: The First Age of Darkness (1981),[1] the Stranger is first summoned to Sosaria to defeat the evil wizard Mondain who aims to enslave it. Since Mondain possesses the Gem of Immortality, which makes him invulnerable, the Stranger locates a time machine, travels back in time to kill Mondain before he creates the Gem, and shatters the incomplete artifact.

Ultima II: The Revenge of the Enchantress (1982) details Mondain's secret student and lover Minax's attempt to avenge him. Minax launches an attack on the Stranger's homeworld of Earth. Her actions cause doorways to open to various times and locations throughout Earth's history, and brings forth legions of monsters to all of them. The Stranger, after obtaining the Quicksword that alone can harm her, locates the evil sorceress at Castle Shadowguard at the origin of time and defeats her.

Ultima III: Exodus (1983) reveals that Mondain and Minax had an offspring, the titular Exodus, "neither human, nor machine", according to the later games (it is depicted as a computer at the conclusion of the game, and is generally held to be a demonic, self-aware artificial intelligence). Some time after Minax's death, Exodus starts his own attack on Sosaria and the Stranger is summoned once again to destroy it. Exodus was the first installment of the series featuring a player party system, which was used in many later games.
[edit] The Age of Enlightenment: Ultima IV - VI

Ultima IV: Quest of the Avatar (1985) marked a turning point in the series from the traditional "hero vs. villain" plots, instead introducing a complex alignment system based upon the Eight Virtues derived from the combinations of the Three Principles of Love, Truth and Courage. Although Britannia now prospers under Lord British's rule, he fears for his subjects' spiritual well-being and summons the Stranger again to become a spiritual leader of Britannian people by example. Throughout the game, the Stranger's actions determine how close he comes to the ideal. Upon achieving enlightenment in every Virtue, he can reach the Codex of Ultimate Wisdom and becomes the "Avatar", the embodiment of Britannia's virtues.

In Ultima V: Warriors of Destiny (1988), the Avatar returns to Britannia to find that after Lord British had been lost in the Underworld, Lord Blackthorn, who rules in his stead, was corrupted by the Shadowlords and enforces a radically twisted vision of the Virtues, deviating considerably from their original meaning. The Avatar and his companions proceed to rescue the true king, overthrow the tyrant and restore the Virtues in their true form.

Ultima VI: The False Prophet (1990) details the invasion of Britannia by Gargoyles, which the Avatar and his companions have to repel. Over the course of the game it is revealed that the Gargoyles have valid reasons to loathe the Avatar. Exploring the themes of racism and xenophobia, the game tasks the Avatar with understanding and reconciling two seemingly opposing cultures.
[edit] The Age of Armageddon: Ultima VII - IX

Ultima VII: The Black Gate (1992) sees the Avatar entangled in the plan of an ostensibly virtuous and benevolent organization named the Fellowship (inspired by Scientology) to create a gateway for the evil entity known as the Guardian to enter Britannia. An expansion pack was released named Forge of Virtue that added a newly arisen volcanic island to the map that the Avatar was invited to investigate. The tie-in storyline was limited to this island, where a piece of Exodus (his data storage unit) had resurfaced. To leave the island again, the Avatar had to destroy this remnant of Exodus. In the process of doing so, he also created The Black Sword, an immensely powerful weapon possessed by a demon.

Ultima VII Part Two: Serpent Isle (1993) was released as Part 2 of Ultima VII because it used the same game engine as Ultima VII. According to interviews, Richard Garriott felt it therefore did not warrant a new number. Production was rushed due to deadlines set to the developers, and the storyline was cut short; remains of the original, longer storyline can be found in the database. Following the Fellowship's defeat, its founder Batlin flees to the Serpent Isle, pursued by the Avatar and companions. Serpent Isle is revealed as another fragment of former Sosaria, and its history which is revealed throughout the game provides many explanations and ties up many loose ends left over from the Age of Darkness era. Magical storms herald the unraveling of the dying world's very fabric, and the game's mood is notably melancholic and sad, including the voluntary sacrificial death of a long-standing companion of the Avatar. By the end of the game, the Avatar confronts the Guardian but is overpowered and thrown into another world, which became the setting for the next game in the series. The Silver Seed was an expansion pack for Ultima VII Part 2 where the Avatar traveled back in time on Serpent Isle to plant a silver seed to balance the forces that hold Serpent Isle together. Like Forge of Virtue, it created an isolated sub-quest that was irrelevant to the original game's storyline, but provided the Avatar with a plethora of useful and powerful artifacts.

In Ultima VIII: Pagan (1994), the Avatar finds himself exiled to a world of the same name by the Guardian. The Britannic Principles and Virtues are unknown here. Pagan is ruled by the Elemental Titans, god-like servants of the Guardian. The Avatar defeats them with their own magic, ascending to demi-godhood himself, and finally returns to Britannia. A planned expansion pack, The Lost Vale, was canceled after Ultima VIII failed to meet sales expectations.

Please note this game has not been tested on Macs with GMA 950 chipsets, though it is likely to work.

Installation:
Mount the DMG and Drag the games to your App folder or wherever - click to play.

All dos games are pretty much retro....

HiPhish
Nov 18 2012 05:34 PM
Just wanted to mention that the whole Ultima series can be bought from GoG.com

Identifier
Sep 16 2015 10:41 AM
Same problem as danvanmoll, on Yosemite.  When double-clicking the games it loads dosbox and looks like it tries to go full screen but then just immediately closes

Identifier
Sep 16 2015 01:49 PM
I got this working.  Apparently DOSBox crashes on Yosemite when it tries to go to full screen (same thing happens with the Might and Magic apps from portingteam if you press alt+enter to try to make them full screen), so I edited the dosbox.conf file in the package contents to set fullscreen=false, and then it works fine (in a window).

Also uploaded Ultima IX - see other section for that.